In the beginning, God created sno cones and saw that they were good. Isn’t that in The Bible? But seriously, folks, sno cones are an amazing invention– a godsend on a hot summer’s day, for sure.

When did the modern day sno cone come into being? Around 100 years ago, in 1919, there was a guy named Samuel Bert. He lived in East Dallas, Texas, which is definitely an area where it gets hot in the summertime. Samuel Bert was his given name, but people knew him better as “King Sammie.” He sold icy treats at the State Fair of Texas. King Sammie came up with the idea to crush ice and add flavored syrup to it. He smartly patented his ice crusher machine and used a wax cone to serve what became known as a sno cone.

Did you know that sno cones took over the world in the 1950s? Ok, maybe not the world, but they certainly were popular back then. For example, King Sammie’s stand at the state fair would easily sell more than a million sno cones per year in the 1950s. That’s a lot of ice and syrup!

People loved–and still love–that crunchy-yet-consistent feel of the cold ice on their lips on a hot summer’s day. Coupled with flavors like cherry or grape, it’s a tasty treat when the temperature rises above 80 degrees.

Besides state fairs, sno cones ended up becoming a popular concession treat at movie theaters and outdoor festivals. Oh, and they’re a hit at beaches, too.

A summer party is a great excuse to break out the delicious snacks, and we at Miracle Strip Popcorn have a ton of awesome options that you could feature at your party. Here’s a look at our summer favorites.

What’s more appropriate for summer than your very own sno cone machine at your party? We offer a few different types of sno cone machines, as well as a shaved ice machine, plus all of the delicious flavor syrups you could imagine. You want one half grape and one half cherry? No problem!

We also offer all you need for a fully functioning popcorn party. There are a few different sized poppers, plus the corns you’ll need to pop, and gallons of delicious buttery flavor.

If popcorn isn’t your fancy, how do you feel about nacho cheese? Check out our line of nacho cheese products, and really get the party started with some delicious cheesy chips and dip.

If there are kiddos coming to your summer party, why not have them spin their own cotton candy? We offer all the bits and bobs you’ll need, from the sugar to the spinning machines. Get ready for a sugar overload!

If you’re doing an outdoor party, your guests will get thirsty. Why not have a delicious hand-made lemonade station? The kiddos can enjoy sugary sweet lemonade, and the grownups can toss a little vodka in there to make it a party!

Funnel cake isn’t the easiest thing to manufacture, but if you offer it at your party it’ll surely be a big hit with all your guests. Miracle Strip Popcorn has everything you need, from fryers to cake rings to funnel cake mix.

No backyard summer party is complete without some hot dogs, and instead of firing up the whole grill, why not offer your guests a snack on an official hot dog grill? Whether you’re into corn dogs or regular dogs, we have what you need.

If you have any questions about our products, or are looking for some more summer party tips, contact us today! 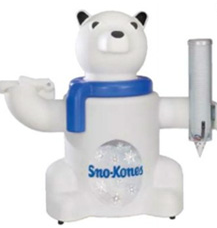 At Miracle Strip Popcorn and Concession Supply, we offer professional quality concession equipment for sale and rent in the Florida Panhandle area. If you look at our website, you’ll find that we offer both sno cones and shaved ice. However, most people don’t even know of the difference between the two. While we’ve touched on this topic in the past, we thought it would be worth repeating. Because to us, the distinction is an important and interesting one.

Miracle Strip Popcorn carries both sno cone and shaved ice machines for rent and for sale in the Florida panhandle area. Visit our website for more information, and give us a call to add either tasty treat to your next event. There’s one thing that sno cones and shaved ice will always have in common: They both do a great job of cooling down happy mouths from the Florida heat. 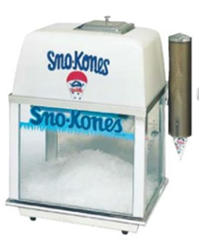 With the arrival of a cold and snowy winter in much of the United States (but not here in Florida!), it’s nice to be reminded of summer times when snow and ice would have been welcomed as a cool reprieve from the scorching heat. In fact, this is precisely how the sno-cone came into existence. The tasty treat now widely enjoyed through all four seasons was created over time based on a unique set of circumstances and very practical purposes.

Before modern refrigeration, ice needed to be transported to warmer climates by wagon, in huge blocks to prevent them from melting. Stories out of Baltimore, MD from the mid-19th century describe children greeting the wagons on their way south, begging the driver to shave off a little ice to melt in their mouth and help them cool down. Eventually, mothers of the children began to make flavoring to prepare for the arrival of the ice. Before long, ice was being hand shaved at movie theaters so that patrons could enjoy flavored “snowballs” during the hottest summer months.

Snowballs spread gradually around the country, serving as an inexpensive, enjoyable treat during the Great Depression and an appropriate replacement for all the ice cream that was shipped to soldiers during World War II.

Meanwhile, the technology used to make what would come to be known as sno-cones was making big strides. In 1919, a man named Samuel Bert created a machine used to make sno-cones that he sold at the Texas State Fair. While Bert’s machine made sno-cones by crushing ice, a New Orleans man named Ernest Hansen introduced the block-style shaving machine in 1934. The new machine created ice shaving more in line with the actual consistency of snow, and made the icy cold treats a source of pride in the Big Easy.

Ever since, sno-cones have exploded into one of the most popular summer treats in the country. They’ve also inspired the creation of modern iterations like frozen coffee and adult beverages. The next time you cool down with a sno-cone, take a moment to think about just how far they’ve come.

To rent or purchase sno-cone machines and other fun concession and snack bar equipment for your business or event in Florida, contact Miracle Strip Popcorn and Concession Supply today.

So what’s it going to be, a sno cone or shaved ice? While you may think these are one in the same, you are sadly mistaken. Contrary to popular belief, there are some differences between a sno cone and shaved ice. However, whichever variation of flavored ice you chose you are sure to enjoy this refreshing treat, any time of year.

• A sno cone is a ball of ice granular, flavored with one or many sweet syrups
• Shaved ice is a lighter, fluffy version of a sno cone, also flavored by syrup
• Shaved ice holds the flavoring better than a sno cone due to its texture

If you are throwing a party, whether it is in the summer or winter, a sno cone or shaved ice machine is sure to make a lasting impression with your guests. Unlike a boring old cake or the overdone build your own sundae station; give your guests something to talk about during and after the party.

Great for parties, carnivals and concession stands alike, sno cones and shaved ice machines are a great addition to any event! If you are throwing a party in Florida, be sure to contact us, Miracle Strip Popcorn, for more information about our party rentals and supplies!